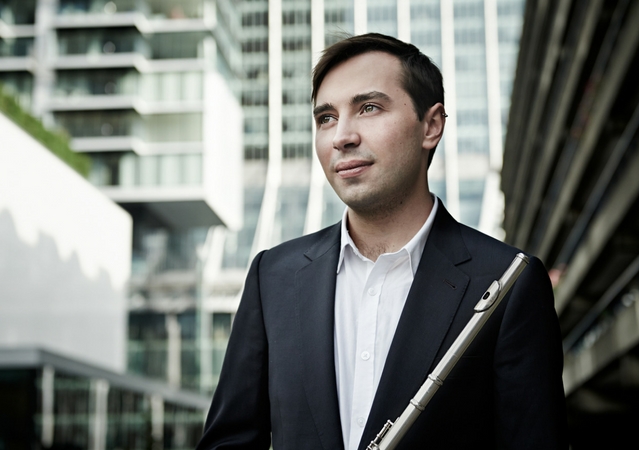 Adam Walker is leading a new generation of wind soloists and was described by Classic FM as “one of the top 5 international flautists”. In 2009 at the age of 21, Adam Walker was appointed principal flute of the London Symphony Orchestra and received the Outstanding Young Artist Award at MIDEM Classique in Cannes. In 2010 he won a Borletti-Buitoni Trust Fellowship Award and was shortlisted for the Royal Philharmonic Society Outstanding Young Artist Award.

An ambassador for the flute with a ferocious appetite for repertoire, Adam’s interests range from the less well-known French Baroque through to newly commissioned works. In 2011 he gave the world premiere of Brett Dean’s The Siduri Dances with the BBC National Orchestra of Wales and in 2013 Marin Alsop invited him to give the world premiere of Kevin Puts’ Flute Concerto at the Cabrillo Festival. The London Symphony Orchestra and BBT jointly commissioned Huw Watkins to write a flute concerto which Adam premiered in February 2014 under Daniel Harding which he repeated a few months later

with the BBC National Orchestra of Wales.

As a soloist Adam has performed with the Vienna Chamber Orchestra at the Konzerthaus, the Solistes Européens, Luxembourg, BBC Scottish Symphony Orchestra at the Southbank Centre’s ‘The Rest is Noise’ Festival and with the Royal Philharmonic Orchestra, Academy of St. Martin in the Fields, Hallé, Bournemouth Symphony, Northern Sinfonia, City of Birmingham Symphony and is a regular visitor to the BBC National Orchestra of Wales. Recital appearances include LSO St. Luke’s (broadcast by BBC Radio 3), City of London Festival, Varese (Italy) and Festspiele Mecklenburg-Vorpommern. He appears regularly at Wigmore Hall where he has recently worked with Brett Dean, pianists Angela Hewitt and James Baillieu, guitarist Morgan Szymanski and singers Bernarda Fink and Karina Gauvin.

Highlights of the 2014/15 season include a return to the US for performances with the Seattle Symphony and Baltimore Symphony Orchestra with Marin Alsop, as well as a debut with the Seoul Philharmonic Orchestra under Mikko Frank. Closer to home he performs with the RTE National Symphony Orchestra of Ireland in a return to the Watkins Flute Concerto. As a recitalist highlights will include a performance at the Louvre in Paris, and he embarks on a new collaboration with Harpsichordist Mahan Esfahani at the Newbury Spring Festival.

His first CD was released in 2013 on the ROH Opus Arte Label; “Vocalise” takes inspiration from song and includes works by Poulenc, Messiaen, Bartok, Barber and Schubert. The Gramophone review recognized Adam as “a superb player [with] much delicacy of nuance in his phrasing [and] stunning virtuosity”.

Born in 1987, Adam Walker studied at Chetham’s School of Music and the Royal Academy of Music with Michael Cox graduating with distinction in 2009 and winning the HRH Princess Alice Prize for exemplary studentship. In 2004 he was a Concerto Finalist in the BBC Young Musicians Competition and in 2007 was selected for representation by Young Classical Artists Trust (YCAT).

Adam is Visiting Professor of Flute at the Royal College of Music, London. 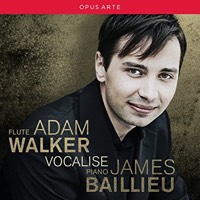