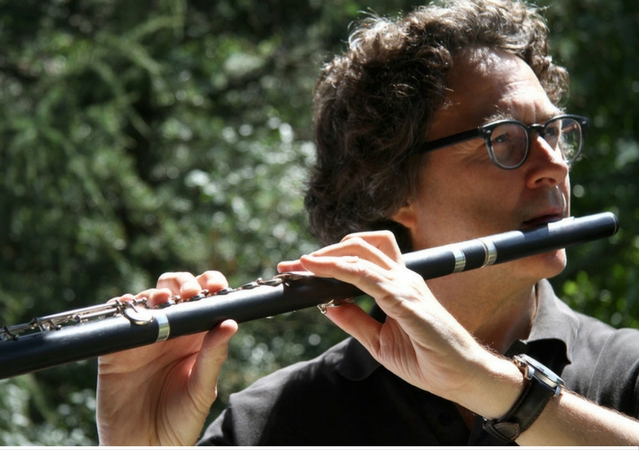 Born in Barcelona, he currently teaches flute, chamber music and improvisation at the Escola Superior de Música de Catalunya (EsMucC) and is flute soloist in the Symphony Orchestra of the Gran Teatre del Liceu, where he plays with some of the world’s great singers and conductors. A graduate from the University of Music and Performing Arts Munich, under Professor Paul Meisen, while in Munich he took decisive musical inspiration from Sergiu Celibidache. He also studied with Barthold Kuijken, Robert Aitken, György Sebök and Jean-Pierre Rampal. He was member of many group settings, including flute and harp duo, flute and guitar duo, the CGAC Contemporary Music Ensemble in Santiago de Compostela, and the National Classical Orchestra of Andorra. He has played in the Barcelona Symphony and Catalonia National Orchestra, Castile-León Orchestra, Teatre Lliure Orchestra, Barcelona 216, Cadaqués Orchestra, and recently the Qatar Philharmonic and Wiener Staatsoper (Wiener Philarmoniker). He has conducted the Gèrminans Youth Orchestra and has taught at the Catalonia National Youth Orchestra, Gran Teatre del Liceu Orchestra Academy and L’Escola de Música de Barcelona, as well as being artistic director of the Barcelona Chamber Philharmonic. He has given concerts in Europe, America (Canada and Argentina) and Japan. He has taught courses in several universities and conservatoires, most recently in Buenos Aires on the subject of Phenomenology of Music Applied to the Flute.

He has several recordings on CD: Soliloquis (solo flute), Aires y Tiempos (flute and guitar), A Night at the Opera (flute and harp) and with various chamber and symphonic orchestras.