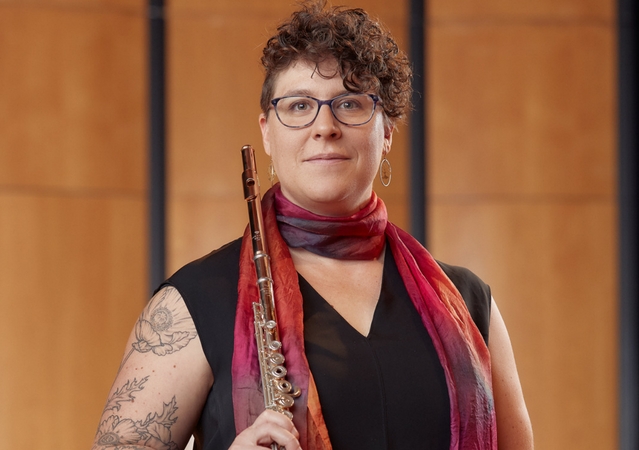 Praised by the Cleveland Plain Dealer for her “superb command of color and nuance,” Elise Blatchford is the Associate Professor of Flute at the University of Memphis Scheidt School of Music.

A chamber musician, soloist, orchestral musician, and teacher, Ms. Blatchford is a flutist who embraces the independent, the experimental, and the DIY. As a founding member of the new music woodwind quintet The City of Tomorrow, Ms. Blatchford won first prize at the 2011 Fischoff National Chamber Music Competition and received a Chamber Music America Classical Commissioning grant in 2014. The quintet tours nationally and was in residence at Tufts University in Boston in February 2019. Ms. Blatchford has appeared with the International Contemporary Ensemble in New York and at the Banff Centre for Creativity in Alberta, Canada.

As a recitalist, Ms. Blatchford frequently programs music of the 20th and 21st centuries, and has been an invited guest at venues across the U.S., including Yale, Indiana University, University of Oregon, and Virginia Tech.

Also at home in the traditional orchestra world, Ms. Blatchford served as Principal Flute for the Memphis Symphony Orchestra’s 2018-19 season. She performs regularly with the IRIS Orchestra, and she has played with the Oregon Symphony, the Civic Orchestra of Chicago, and the YOA Orchestra of the Americas. With YOA, she toured extensively throughout South America, the Caribbean, and mainland China, made an appearance at Carnegie Hall with Valery Gergiev, and recorded with Philip Glass

Ms. Blatchford holds degrees in flute performance from the Oberlin Conservatory of Music and the San Francisco Conservatory.