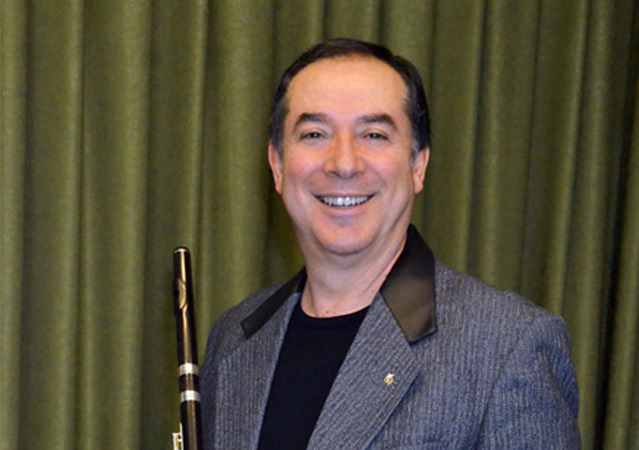 Born in Ankara .He received his music and flute lessons from his father, Ismail Ayvazoğlu. During his education, following an exam opened by the “Ankara State Opera and Ballet” he was accepted to the State Opera Orchestra in 1976.While making small programmes of harpa and flute duets for the TRT Ankara Radio, Ayvazoğlu also gave concerts as a soloist player with the Ankara Chamber Orchestra. He was transferred to the “ Izmir State Opera and Ballet ” as Principal Solo Flutist in 1983.He gave concerts with the orchestra as a soloist performer and performed in the harpa and flute duets for the chamber groups. With a private scholarship Ayvazoğlu worked with. Prof.Hermann Klemeyer in the “Munich Higher School of Music” where he became Dr. Jochen Gartner’s
student. He received a “master flutist” diploma from the “ Munich Richard Strauss Conservatory ” in 1992.While performing as soloist flutist for the “Richard Strauss Orchestra” for one year, Hürkan Ayvazoğlu also worked as a guest performer for the “Neu Munich Symphony Orchestra”, “Ulm Philharmonic Orchestra”, “Reutlingen Philharmonic Orchestra”. He toured in Italy, Greece, Romania, Bulgaria, France, Holland, Tcheck Republic, Hungary, Azerbejian, Russian Republic, Mexico and numerous other European countries with orchestras and piano accompaniment concerts.He gave numerous concerts in Germany. While participating in opera and music festivals in various countries throughout the year, also continues his work as a flute and chamber music instructor in “D.E.University Izmir State Conservatory ” and Department of Music in “Yaşar University Art and Design Faculity”. In the season of 2014- 2015, during his solo Flutist career, he worked as a Director and Artistic Director of Izmir State Opera and Ballet.