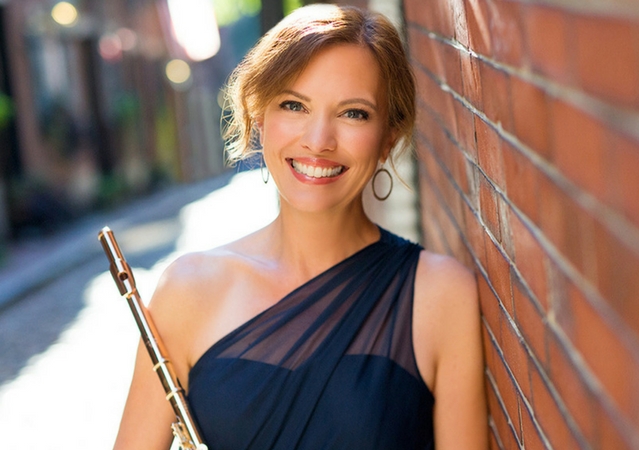 Instructor of Flute at the Interlochen Arts Academy

Powell Artist NANCY STAGNITTA is a leading crossover artist as both classical flutist and jazz artist. Praised for her “brilliance and beauty of tone” by the Baltimore Sun, her passion, versatility, and elegant artistry have led to concert engagements in Europe, Asia, Africa, and across the U.S. In 2018, she will perform and teach at the École Normale Supérieure in Paris and will appear as concerto soloist with the China National Symphony in Beijing.

Her recent album with Grammy Award winning pianist and composer Bob James, “In the Chapel in the Moonlight,” has garnered acclaim across musical genres, and was described in JAZZIZ magazine as “…captivating… brilliant… striking… Stagnitta effortlessly picks up on [James’] attitude, sounding not unlike Hubert Laws.” “Nancy Stagnitta is among a very few flutists on the planet who can truly play both classical and jazz flute,” says legendary flutist Jim Walker. “The recent recording with Bob James speaks volumes to her fluency and talent in great flute playing.” It was declared “an album to be treasured” by renowned flutist Paula Robison. Stagnitta has also recorded contemporary American classical repertoire for Capstone Records, and was recently featured on American Public Media’s Performance Today.

Appointed as U.S.I.A. Artistic Ambassador to southern Africa, she presented concerts and master classes in Angola, Botswana, Madagascar, Mauritius, Mozambique and Namibia. She has also performed at the Shanghai Conservatory, the Biblioteca Universitaria di Napoli, Tchaikovsky Hall in Moscow, and on the Voice of America Broadcast Network and National Public Radio. A two-time recipient of the Maryland State Arts Council Solo Artist Award, she was named a semi-finalist in the National Flute Association Young Artist Competition.

Former piccoloist with the Baltimore and Sarasota Opera Orchestras, she has appeared as concerto soloist with the National Gallery Orchestra in Washington, D.C. and served as artist/faculty at the Amalfi Coast International Music Festival in Italy, the Da Capo Festival in Utah, the Panoramic Flutist in Colorado, the Hot Springs Festival in Arkansas, and the Montecito Festival in California. She was the featured jazz soloist at the National Flute Association Convention in Chicago.

A passionate educator, Stagnitta currently serves as Instructor of Flute at Interlochen Arts Academy, a world leader in arts education. Her students have consistently attended top conservatory programs, won major awards and competitions, and can be heard in orchestras and ensembles around the world. Eight of her students have won the prestigious $10,000 Jack Kent Cooke Young Artist Award, and subsequently appeared on NPR’s “From the Top,” since 2009. She has offered masterclasses in Germany, Italy, Shanghai, and at American universities in Austin, Boulder, and Phoenix, among many others. As a result of her holistic approach to teaching, and to an ongoing collaboration with the dance and physics departments at Interlochen, she was invited to present a lecture on the relationship between body alignment, resonance, and injury prevention at the 2011 Performing Artist and Athlete Science Symposium.   She earned her degrees from the Peabody Institute of The Johns Hopkins University, where she received the Ashworth Prize.  Her teachers include Robert Willoughby, Tim Day, and Mark Sparks.