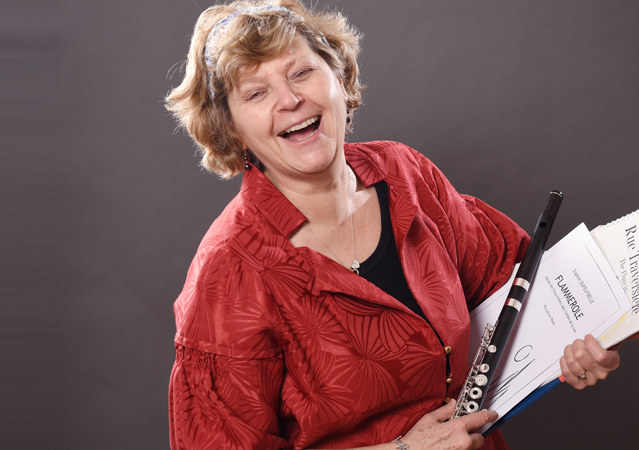 She is the author of a sizable catalogue, primarily composed of works for flute, introducing musicians of all ages to inventiveness and creativity in music. Her repertoire delights in musical pleasure, improvisation, listening and group play.  It is designed to present intriguing pieces at every level, from very young beginners to advanced flutists. The pieces are cheerful, convivial, and full of surprises, leading the listeners to experience colors and atmosphere. They explore extended techniques for the flute, mixing the techniques with classical sounds. The inclusion of improvisation means that the pieces change even as they are performed.

Her compositions are regularly programmed in concerts by soloists and flute ensembles, and played in classes and competitions. They have become classics of the modern repertoire, both in France and internationally.

The quality and originality of her work, along with the enthusiasm she generates in flutists, have earned her international recognition, and she is regularly invited to conservatoires, universities and conventions around the world (France, Switzerland, Germany, England, USA, Norway, Netherlands, Croatia, Sweden, Spain, Bolivia, Argentina, Poland, Austria, etc..) Renowned soloists, including Maxence Larrieu, Philippe Bernold, Matthias Ziegler, Jean-Louis Beaumadier and Peter Sheridan have commissioned and premiered her works.

Sophie DUFEUTRELLE has been teaching flute in the National School in Villeurbanne, France, since 1981; she is also teacher-training advisor for the Superior Conservatories of Music of Paris and Lyon.

Founding member of ‘PENTAGÔNES’, a flute sextet with whom she regularly plays in concert and has recorded 2 cds, she has also been guest conductor of the Orchestre de Flûtes du Rhône since 2008 to 2014, and orchestra of over 60 musicians.

Sophie also served as President of the French Flute Association “LA TRAVERSIERE” from 1986 to 1991.