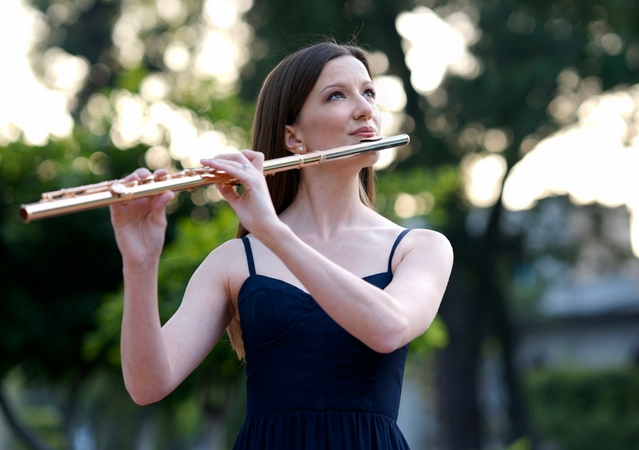 Professor of Flute at the University of Missouri School of Music

Ms. Dade can be heard on Deutsche Grammophon as Acting Principal Flute of the Swedish Radio and Arte Verum as Flutist and Piccolo of the Swedish Chamber Ensemble with soloist Barbara Hendricks. Her first solo album, Living Music, was released on Naxos in 2018. This recording was sponsored in part by grants through the University of Missouri and Powell Flutes.

Ms. Dade is a guest star of a new PBS series called Now Hear This. Scott Yoo, Ms. Dade’s husband and host of the show, travels the world chasing the secret histories of our greatest musical works and their composers while discovering connections to today’s music, art, and culture.

A columnist of Chicago Flute Club’s quarterly Pipeline Newsletter since 2010, Ms. Dade has also been published in Flute Talk Magazine, The Instrumentalist, and The Flute View.

Alice left her childhood home at the age of fifteen to attend Interlochen Arts Academy. Upon graduation, she attended The Juilliard School for undergraduate and graduate studies, where she studied with Carol Wincenc, Robert Langevin, and Sandra Church.

Alice’s artistry extends beyond her love for classical music. In 2009, she won the Moth SLAM in Detroit, a live story-telling event broadcast regularly on NPR. Alice won the competition with a story of initiation into the Swedish Radio Orchestra, oj, oj, oj!

Alice is a Powell Artist and plays a handmade 14K Powell Flute with a platinum headjoint.