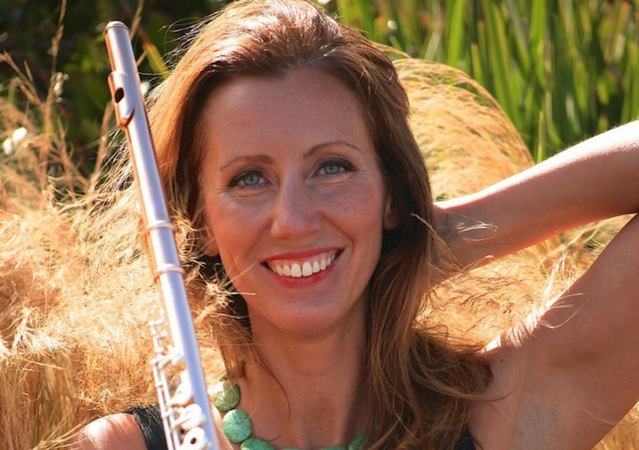 Andrea Fisher aka Fluterscooter is a flutist, producer, and entrepreneur. A graduate of The Juilliard School and a Powell Flutes artist, Fluterscooter has given lectures on Musical Entrepreneurship at NYU, Penn State, Juilliard, University of Iowa, and various flute festivals and masterclasses. Her unique performances incorporate everything from playing flute and organ simultaneously, 3D light projections, and she was the first flutist to perform with hologram technology in Japan.
She has performed and recorded with the likes of John Legend, Ian Anderson, 50 Cent, Puff Daddy, and various pop artists. She also composes and produces, most recently producing her entire meditation album.
The subject of Entrepreneurship is a hot topic in the arts, and Andrea “Fluterscooter” Fisher has been a sought after speaker at universities and conservatories including The Juilliard School, New York University, Penn State University, and University of Iowa, to name a few. She was active in the inception of The Juilliard School’s recent Entrepreneurship program as one of the first Resident Entrepreneurs. Andrea has been giving lectures, workshops, and private coachings to students and graduates of all arts disciplines for the past 4 years.

A graduate of The Juilliard School in flute performance (BM 02, MM 04), Andrea started the popular and fashionable Fluterscooter flute bag brand 6 years ago, and has grown the business to be sold in over 100 stores worldwide. Fluterscooter has thus expanded to include oboe and clarinet bags as well as partnering with Powell Flutes as a manufacturer for their bags. She is also co-founder and editor of The Flute View magazine and has self-released 3 albums.

A performer in her own right, Andrea creates and produces all of her events, and was the first flutist to perform with hologram technology, most recently featured on The Science Channel. She is known for her unique and out of the box performances, including working with a 3D light painter in Tokyo to the infamous concert in which she played flute and organ simultaneously. She is currently working on a virtual reality project, expected to debut in summer 2017.

She presents her Entrepreneurship sessions in a fun and engaging atmosphere, and includes her personal stories, from selling CDs out of an ice cream truck to balancing her creative and business endeavors. Students leave her sessions inspired and with a fresh outlook on their careers and opportunities both in and outside of school.