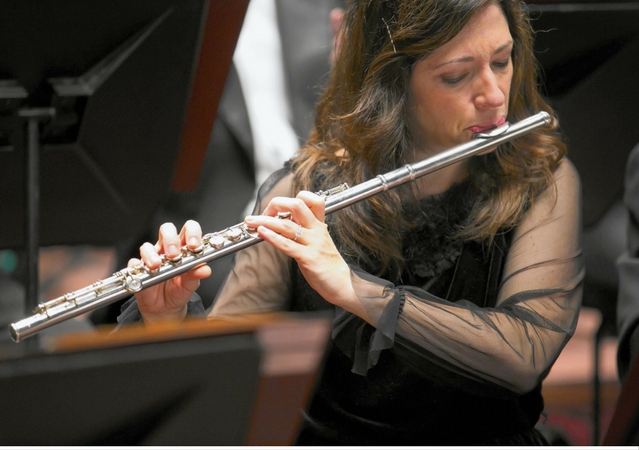 Christina Smith is one of the most sought-after flutists in the country as an orchestral player, soloist, chamber musician, and teacher. The 2015-16 season is Ms. Smith’s twenty-fifth anniversary season as principal flutist of the Atlanta Symphony Orchestra, where she holds the Jill Hertz Principal Flute chair, endowed in perpetuity. Ms. Smith’s flute solos can be heard on 37 ASO recordings. She has also appeared with the orchestra numerous times as concerto soloist, in works of Mozart, Vivaldi, Ibert, Rodrigo, Nielsen, John Corigliano, and Christopher Rouse. Ms. Smith performed the southeastern U.S. premiere of Finnish composer Kaija Saariaho’s “L’aile du songe,” with Robert Spano conducting.

A native of Sonoma County, California, Ms. Smith began studying flute at age seven. She appeared as soloist with many orchestras in Northern California—including the San Francisco Symphony at age 15—before attending Interlochen Arts Academy, where she received the Young Artist Medal (the Academy’s highest honor) in 1989. Immediately after graduation, Ms. Smith began her studies at the Curtis Institute of Music as a pupil of the legendary Julius Baker. After just two years in Mr. Baker’s studio, she won the principal flute chair in the ASO at age 20. Ms. Smith has also studied with Jeffrey Khaner, Tim Day, and has collaborated extensively with master teacher and clinician Keith Underwood.

Throughout her career, Ms. Smith has continued to perform at the nation’s most prestigious summer festivals, including Marlboro, Highlands, the Strings Festival, and the Grand Teton Music Festival. She has performed with the Bellingham (WA) Festival of Music chamber orchestra since 1994, and was the concerto soloist on the festival’s opening gala concert in 2010. In addition, Ms. Smith has been invited to teach some of the world’s most promising young orchestral musicians at the Bowdoin Music Festival in Maine as well as the National Orchestral Institute in College Park, MD.

Ms. Smith has recently appeared as guest principal flutist with orchestras such as the Chicago Symphony, Los Angeles Philharmonic, the Vancouver Symphony, the Baltimore Symphony, the St. Paul Chamber Orchestra, and the Pittsburgh Symphony. She earned critical acclaim while performing on the latter ensemble’s 2010 European Tour.

A prolific and accomplished chamber musician, Ms. Smith performed for over a decade with the Atlanta Chamber Players, with whom she performed in Boston’s Jordan Hall and at Weill Recital Hall at Carnegie Hall. She has recorded John Harbison’s “Songs America Loves to Sing” and Norman Dello Joio’s Trio for Flute, Cello, and Piano with the ACP. She has also helped launch a pre-concertchamber music series featuring ASO musicians—a program that began its first official season in 2011-12, and is now thriving both financially and artistically. Ms. Smith’s longtime collaboration with ASO principal harpist Elisabeth Remy Johnson resulted in the 2008 release of a duet album entitled “Encantamiento.” She has appeared in recital with numerous prominent classical musicians including guitarists Pepe Romero and Eliot Fisk.

Equally passionate about teaching, Ms. Smith serves on the faculty at Kennesaw State University and maintains a busy private studio. She remains highly in demand to teach masterclasses across the country.

Ms. Smith plays a vintage solid platinum flute, handmade in 1938 by Verne Q. Powell. The flute was once owned by renowned flutist Joseph Mariano, and has a rare one-piece body. Ms. Smith lives in Atlanta with her husband and two daughters.