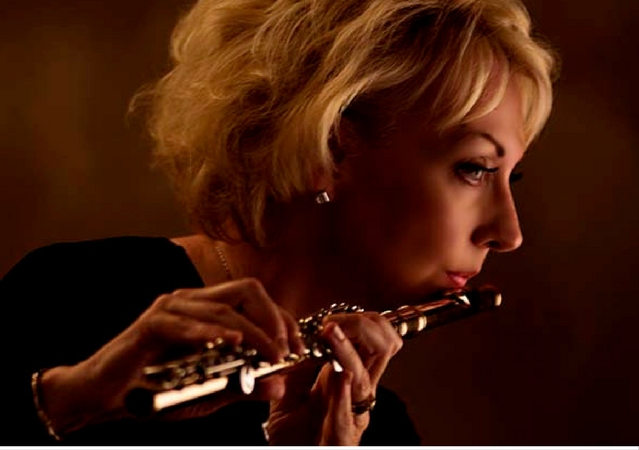 Flutist Cynthia Bueker Ellis is a member of the Pacific Symphony, playing solo piccolo since 1979. Her performance credits also include Los Angeles Music Center Opera, Pasadena Chamber Orchestra and the Cabrillo Music Festival in Santa Cruz, California. She also served as the principal flutist for touring ballet companies on their Orange County stops including the Royal Ballet of London, American Ballet Theater, Stuttgart Ballet, Bolshoi Ballet, and the San Francisco Ballet. In January of 1995, she was appointed Principal Flutist with the Opera Pacific Orchestra, a position she held until the company’s closing in 2009. She has recorded with the Hollywood Bowl Orchestra, the Pacific Symphony, and the Los Angeles Philharmonic Orchestra as well as on several major motion picture and cartoon soundtracks.

Ms. Ellis received both her Bachelor and Master of Music degrees with Honors from California State University, Fullerton and was chosen as Music Associates Outstanding Student of the Year upon completion of her work in 1983. Her many scholastics honors include membership to the honor societies of Pi Kappa Lambda and Phi Kappa Phi, and membership and listing in Outstanding Young Women of America for 1983. She was named as one of O.C. Metro Magazine’s “Ten Women Making a Difference” in March 2002 for her work in the field of music education. She has been published in Flute Talk magazine, an international educational journal, and was appointed editor of the “Let’s Talk Picc” column in May 2003. She won the John and Mary Virginia Foncannon Chamber Music Scholarship from the Mu Phi Epilson Foundation in 2007, as well as the Pacific Symphony Chairman of the Board “Orchestra Hero” award.

Music education is an important facet of Cindy’s career. She served as instructor of flute at California State University at Fullerton, where she held a lectureship position and coached chamber music from 1985 to 2011. In October 2003, Ms. Ellis performed the world premiere of Stephen Maphar’s Sonata for Flute, Wind Ensemble and Women’s Choir, “The Celestial, at CSUF. In addition, Cindy is an instructor for Pacific Symphony’s nationally recognized “Class Act” education and out reach program. She has served the national Flute Association pedagogy Committee and is a member of Mu Phi Epsilon. She was the program Chair for the NFA’s annual convention held in Anaheim, CA, in 2010. In 2011 she was named Music Director of the Laguna Flutes, a 25-member flute ensemble which concertizes throughout Orange County. Cindy is currently on faculty at Vanguard University and Saddleback College. She was part of the teaching artist faculty at the International Piccolo Symposium in Omaha, Nebraska, in 2013 and was in residence at the Victoria Conservatory of Music in Victoria, British Columbia, Canada in 2016, for a masterclass and recital series.

“The playing is highly skilled and full of energy. Devotion to great music making is readily apparent”, American Record Guide Review 2006 (In review of Beyond Beethoven: 20th Century Chamber Music)

“The Face of Pan” – distinguishes by the fine playing of flautist Cindy Ellis – is a
Lovely piece of music whatever the context.”, Orange County Register, Paul Bodine, August 26, 2007 (In review of Pacific Symphony Verizon Wireless Concert: A Tribute to John Williams)