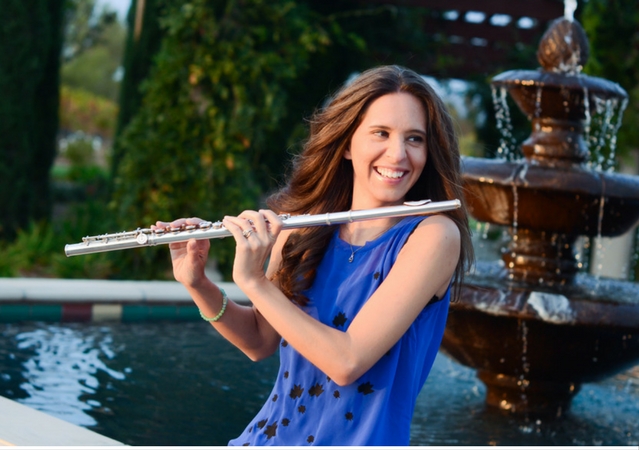 Kate Prestia-Schaub is an active and enthusiastic performing and recording artist in Southern California. She is the first place winner of many prestigious competitions, most notably the National Flute Association Piccolo Artist Competition, the San Diego Flute Guild Artist Gold Competition, and the Indiana University Woodwind Concerto Competition. Kate made her solo piccolo debut with the Colorado Symphony Orchestra at age 18, and since then, has concertized throughout the United States, Canada, Japan, Germany, Austria, and the Czech Republic. With degrees from the University of Southern California (MM) and Indiana University (BM), her primary teachers have been Jim Walker, Tom Robertello, Kate Lukas, and Maralyn Prestia.

Passionate about expanding the solo piccolo repertoire, Kate enjoys working with world-renowned composers to inspire incredible new classic piccolo literature. Martin Kennedy, Daniel Dorff, and Frederick Lesemann among others have written new piccolo repertoire for Kate, and she has performed the world premier of their works at National Flute Association Conventions, International Piccolo Symposiums, and many notable flute festivals around the country. She has the premier recordings of the works on her debut album Timeless, released in 2013.
Kate is fortunate to collaborate with some of the finest professional musicians in California, performing solo and chamber music in a variety of ensembles. The flute/piano duo Ekatra, and the West Coast Wind Quintet, have both won critical acclaim in Southern California. Kate is a regular soloist for the “Classics at the Merc,” “Rancho Bernardo Music Guild,” and many additional classical concert and chamber music series. In addition, she is principal flutist in the Temecula Valley Symphony. New in 2016: Kate has been asked to perform as a guest on several concerts as 3rd flute/piccolo with the Omaha Symphony.

Ms. Prestia-Schaub is a Powell Flutes “Master Teacher”; and she also enjoys teaching a studio full of dedicated flute students in her studio in Temecula, California. Kate is often invited to facilitate piccolo and flute master classes at various universities and flute festivals throughout the country. She coaches the flute sections at Shivela Middle School, Vista Murrieta High School, Murrieta Valley High School, and the woodwind section of the Temecula Valley Youth Symphony. She has also served on the adjunct faculty as a flute instructor and chamber music coach at the Idyllwild Arts Academy.

In order to bring exceptional activities and opportunities to Southern California for professional musicians and students alike, Kate serves on the board of the San Diego Flute Guild, the Music Teachers Association of California – Temecula Valley Branch, and the advisory committee for educational outreach for the California Chamber Orchestra. She has also served on the advisory committee for the National Flute Association, and in 2016, she was on the committee for the NFA’s Youth Flute Day for the San Diego Convention.

In addition to her life and love in the music world, Kate enjoys spending time with her husband Kevin, their 2 kitties, Milo and Millie, and their puppy, Merlin. he enjoys the beach, the mountains, the smell and colors of spring, oh, and an occasional toffee nut latte.