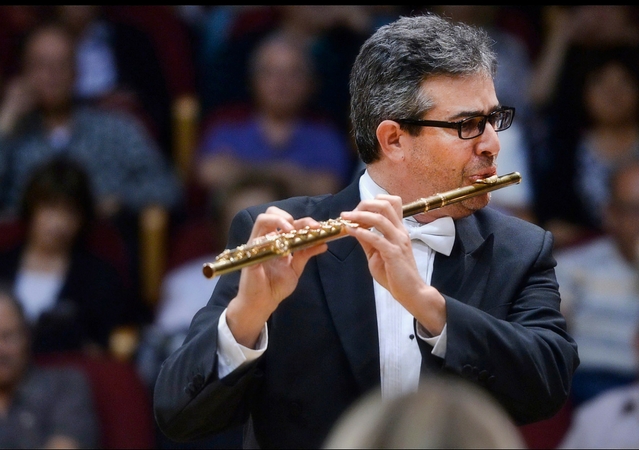 Professor of Flute at the Musikhochschule Münster

Since he left the orchestra as a flute player, he has become the Head of the Orchestral training programme at the Buchmann-Mehta School of Music as well as Music Director of the Classica Orchestra Rehovot and the Israel Flute Choir.
Recently appointed as Flute Professor at the Musikhochschule Münster, Germany.

Eyal appears regularly both as a soloist and as a conductor with all the major Israeli orchestras, as well as with various orchestras around the world. He gives international recitals and master-classes and has appeared in chamber music festivals and concert tours in Israel, Europe, North and South America and Canada. He was recently a jury member of the Concours de Genève, celebrating its 75th anniversary.

He was the featured soloist on the IPO’s USA tour in November 2008, performing Bernstein’s Halil in New York’s Carnegie Hall, as well as in New Jersey, Philadelphia, San Diego and Los Angeles. Flutist Eyal Ein-Habar and conductor Gustavo Dudamel received rave reviews on this tour.

Eyal Ein-Habar is a founding member of the Israel Woodwind Quintet as well as the Israel Flute Choir. He has recorded chamber music with the Quintet, with the Israel Flute Ensemble and others. His recordings can be found on Centaur Records (USA), Meridian (England), IMI (Israel) and other labels. His CD, “It Takes Two to Trio” (Centaur Records) – with trios for flute, oboe and keyboard – was highly acclaimed by the American Record Guide and by Pan Magazine of the British Flute Association.