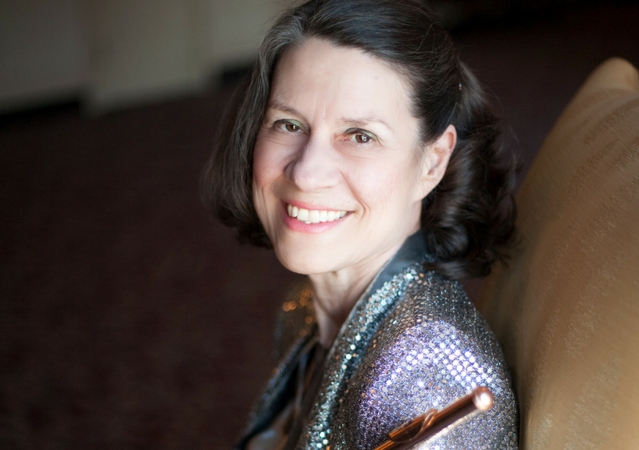 Flute Professor at the Eastman School of Music

Born in Pittsburgh, Bonita Boyd grew up in Long Beach, California. Her early teachers included Maurice Sharp of the Cleveland Orchestra, Roger Stevens of the Los Angeles Philharmonic, and Joseph Mariano, principal flutist of the Rochester Philharmonic and legendary pedagogue of the Eastman School of Music. Boyd succeeded Mariano in both posts, becoming the youngest person in the United States to hold major academic and orchestral appointments, as noted by Glamour Magazine when Bonita was featured in its “Outstanding Career Women of the Year” article.

At age 21, Bonita was named Principal Flutist of the Rochester Philharmonic under Maestro David Zinman, a position she resigned in 1984 to devote herself to her growing solo career. Boyd gave an acclaimed New York debut recital 1980, which was described by the New York Times as “a flabbergasting account of her talents.” Three years later she made her Los Angeles debut of which Albert Goldberg of the Los Angeles Times said, “James Galway and Jean-Pierre Rampal are now joined in the forward ranks by a young American girl named Bonita Boyd”. Subsequently she made her first solo tours of Europe and the Far East, during which the Frankfurter Allgemeine hailed her as “a musician of great dimension”. She has since performed as recitalist throughout the world and as soloist with such orchestras as the National Gallery Orchestra, National Symphony of the Dominican Republic, Chautauqua Symphony, Concerto Soloists of Philadelphia, Denver Chamber Orchestra, Buffalo Philharmonic, Pusan (Korea) Symphony Orchestra, Western Australia Symphony, Queensland Symphony, Polish Radio Orchestra, and Vilnius (Lithuania) Chamber Orchestra, Rochester Philharmonic, California Chamber Symphony, New Jersey Symphony, and Albuquerque Symphony, and Victoria Symphony (CBC). She served as Principal Flutist of the Rochester Philharmonic Orchestra (1971-1984), Chautauqua Symphony (1971-1977), Filarmonica de las Americas (Mexico City), and the Aspen Festival Symphony Orchestra (1998-2015). She has been a member of the artist faculties of such festivals asChautauqua, Bowdoin, Johannesen International Festival, Hamamatsu Seminar (Japan), Aspen Music Festival, and guest artist at Eastern Music Festival, MasterWorks, Marlboro, National Orchestral Institute, and Teton Festival. She has been a Fulbright Grant recipient, and has been President of the National Flute Association, a 5000-member international organization of flutists from around the world. She has been an artist-faculty member of the Eastman School of Music since her appointment in1976.

Bonita Boyd has premiered numerous works, including Samuel Adler’s Concerto for Flute and Orchestra (1977), Warren Benson’s Five Lyrics of Louis Bogan (1978) and Concertino for Flute, Strings, and Percussion, Sonata for Solo Flute of Miklos Rosza (1983), Eclipse Musings of Augusta Reed Thomas (1998), Eric Sessler’s Hammerhead for Flute and Guitar (2006), the first performance at the National Flute Association Convention of Melinda Wagner’s Pulitzer Award-winning Flute Concerto (2010), and has made the premiere recordings of many others, including Roberto Sierra’s Concierto Caribe (1996), Liptak Songs of Persephone (2010), and Maslanka’s Duo for Flute and Piano (1997). Her recording, Flute Music of Les Six, was honored by Stereo Review in its Record of the Year Awards, and her Paganini Caprices CD was on the final ballot for a Grammy nomination. Recent releases include the premiere recording of Bernstein’s Halil (chamber version), and a new CD, Quicksilver, with renowned guitarist Nicholas Goluses and guest artist, Metropolitan opera star, Katherine Lewek.

Ms. Boyd has recently been named a Lifetime Achievement Award winner by the National Flute Association, joining the ranks of such legendary flutists as James Galway and Julius Baker.

Bonita has been awarded the Eisenhart Award for Excellence in Teaching by the Eastman School of Music, and her students occupy major orchestral and teaching posts throughout the world. She and her late husband, Christian Soderstrom, a Swedish engineer, have three sons.